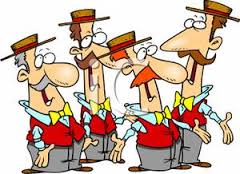 Barbershop is a particular style of ‘a capella close harmony’ singing, comprising of four voice parts (Lead, Bass, Baritone and Tenor), which can be traced back to the late 19th century.  Unlike other forms of a capella, in traditional Barbershop arrangements all four voice parts sing the words (or at least the majority of them).  There is little or no vocal ‘backbeat’ accompaniment.

The other aspects which differentiate Barbershop are the chord structures and the ‘Ringing Chord’.

A Barbershop arrangement will include a number of major and minor ‘Seventh’ chords, giving the distinct Barbershop sounds.  If you want the technical detail a good source is the British Association of Barbershop Singers website.

When a Barbershop arrangement is sung well, it is sometimes possible to hear a 5th note which is not actually being sung by any of the voice parts.  This is the ‘Overtone’ or ‘Angels Voice’, which is caused by the combination of the other four notes and which is the ambition of any Barbershop group.  For more information about Barbershop singing take a look at Wikipedia.

Now you know a a little about Barbershop singing, read about the Wayfarers Chorus.

Although our rehearsals and performances have been cancelled until further notice, due to the Covid-19 outbreak, we are still happy to receive contact from potential new members.  Browse our website to learn more about us.  If you fancy getting in touch, simply fill in our contact form using the link below.

By continuing to browse the site you are agreeing to our use of cookies.
Scroll Up